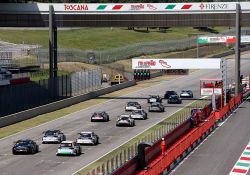 TCR Europe, WSC Group’s subsidiary, and Peroni Group join forces with Italy’s National Sporting Authority ACI Sport for the organisation of 2-hour races reserved for TCR cars fitted with a DSG gearbox.
TCR Europe will organise the TCR Europe DSG series, some events of which will also count towards the TCR DSG Endurance Italy championships.
The two series will form the same grid in four occasions at Imola, Misano, Mugello and Barcelona; the European series will also run at Spa-Francorchamps and Brno, while the schedule of the Italian championship will be completed by an event at Vallelunga.

“We are pleased with this agreement,” said Marcello Lotti, president of WSC Group. “In Europe there are a lot of teams that run TCR DSG cars, and this new international series awarding two different titles will offer them the opportunity to race on some of the best racetracks in Europe and compete at a higher level.”

ACI Sport general director Marco Rogano echoed: “I believe we have reached an important agreement that will give the teams the chance to take part in both the TCR Europe DSG and TCR DSG Endurance Italy series with a calendar of only seven rounds. After the positive experience of last year, the TCR DSG Endurance competitors will now be able to race in both Italy and Europe.”