The first win goes to the Italian Team 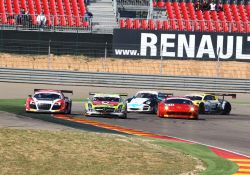 Is the AF Corse due Tanakorn Ramindra and Cedric Sbirrazzuoli on Ferrari 458 GT3 the winner of the first round of the Super Cars International Series. In Aragon the Spanish Montecarlo  crew managed the win the two hours race over the 2012 Portuguese Champions Campanico/Viera (with them on the Audi R8 LMS Ultra also the Finn Eskelinen) and on the Portuguese Oasis Motorsport trio Ferreira/Carvalho/Ferrao (Ferrari 430 Challenge), first overall in the GT Cup.

For the new AF Corse crew, the victory takes shape in the second stint when, thanks also to the different strategies, they seize the lead and defend it till the chequered flag.

The race opens with Fontes that, on the Sports and You Mercedes SLS AMG GT3, slips by the pole setter car of Campanico, Eskelinen and Viera with the latter at the wheel. He however smartly decide not to react and chose the best moment to regain the lead. This comes at the end of lap two when he makes his move at the end of the main straight constantly gaining meters from then onwards. The challenge is now thence on the two other podium steps with the Fontes Mercedes chased by Ramindra and by the second Team Novadriver Audi R8 LMS Ultra with Buri behind the wheel.

With the first compulsory drivers change window, the first crews in the pits are the two chasing cars with AF Corse that chose for a quick refill rejoining the track as fast as possible. Same strategy also for Sports and You even if their stop is a little bit longer. In the meantime first mechanichal pains for the Racing for Porto Porsche 997 GT3 Cup twice in the pits with gearbox problems. They will end fiercely the race with just the fourth and fifth gear. Gearbox failure also for Ramos who took over the Audi wheel from Buri. Two extra pit stops for them before retiring.

In these stages Sbirrazzuoli started pusshing hard hammering fastest lap times one after the other and gaining precious seconds from the previous leaders now chasers, the last ones to stop. When, with 45 minutes remaining the second compulsory stop window opens Sbirrazzuoli leads with over 2 laps. Their longer stop to fulfill the five minutes overall pit time for the race still bring them back in first place even if with less than a minute margin. Notwithstanding a drive through penalty committed to the leaders for not having respected the minimum stoppage time for just 5 tenths, the overall outcome did not change with Ramindra first with a 39 seconds margin over the chasers. The last coupe de theatre comes from Fontes, determined in taking second place, and also capable of the fastest lap time, who is forced to retire with just ten minutes left for temperature problems to his car #7 engine.