In Aragon the first round of the Series 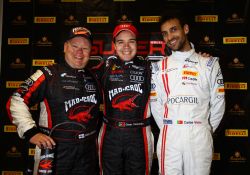 Freezing cold but luckily no rain for the Super Cars International first round qualify ongoing in Motorland (Alcaniz). Gaining the right to start from pole is the Portuguese Gt 2012 Champions crew  Vieira/Campanico for the occasion together with the Finn Eskelinen on the Team Novadriver Audi R8 LMS Ultra. Behind them the Fontes/Barbosa Mercedes SLS AMG (Sports & you) and the AF Corse Ferrari 458 driven by Ramindra/Sbirrazzuoli. Best crono among GT Cup cars for the Porsche 997 GT3 Cup of Baptista/Dias/Machado (Loureiro Jacinto).

Six degrees and plenty of wind but still no rain for the 60 minutes qualify, divided into three 15 minutes session. The track however was still a bit damp and considerably improved as time passed by.

Soon on top the Audi #1 with Vieira capable of almost lapping on Friday free practices’s best times when only two crews managed to break the 2 minutes “wall”. Animating these first fifteen minutes was though the contact at the end of the main straight between Coimbra (Mercedes SLS GT3) and A. Cabral (Porsche 997 GT3 Cup). A misunderstanding between the two causes a contact which implies a broken front right suspension for the Mercedes SLS as well as a serious chassis damage which will not be solved before the start of the race due four hours later.

With the track conditions improving, so do the times. The first serious attempt for pole arrives at the end of the second session with Sbirrazzuoli capable of lapping below the two minutes margin. The grid is however decided in the last minutes of the last session. First strike comes from Campanico with 1.59.572, soon improved by Fontes  in 1.59.560 and, right under the chequered flag, once more by Campanico who managed to stop the clock at 1.59.239.

In the GT Cup challenge, said about the Carreto 18 car crash, close fight between the car driven by Baptista/Dias/Machado and the one of Ferreira/Ferrao/Carvalho (Ferrari F430 – Oasis Motorsport). The pole goes to the first ones soon quick  and them more focused in finding the right pace for the race. The latter instead improved steadily during the whole session.